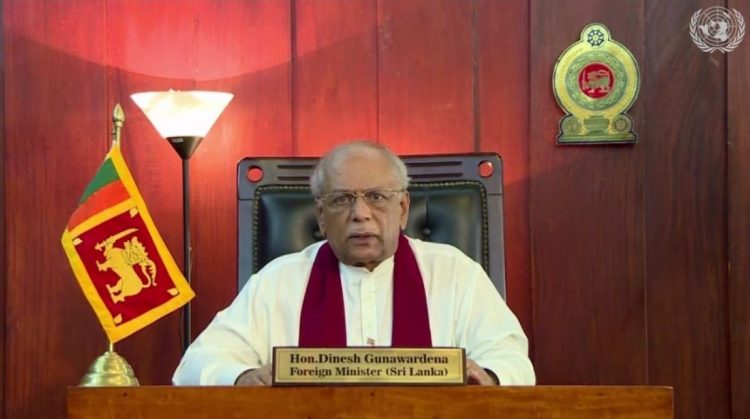 Addressing the 46th UNHRC sessions via video conferencing on Wednesday Sri Lankan Foreign Minister Dinesh Gunawardena lashed out at UN HR Chief Michelle Bachelet over the latter’s call for Sri Lanka to be made accountable.

“Sri Lanka rejects the High Commissioner’s Report which has unjustifiably broadened its scope and mandate further, incorporating many issues of governance and matters that are essentially domestic for any self-respecting, sovereign country. This is in complete violation of Article 2 (7) of the Charter of the UN that states: “Nothing contained in the present Charter shall authorize the United Nations to intervene in matters which are essentially within the domestic jurisdiction of any state…” he said.

“The trajectory that has emerged with regard to the recommendations and conclusions reflects the preconceived, politicized and prejudicial agenda which certain elements have relentlessly pursued against Sri Lanka. These recommendations are based on ill-founded allegations” he added.

“Sri Lanka categorically rejects the conclusions and recommendations in the High Commissioner’s Report. The call for asset freezes, travel bans, references to the ICC and the exercise of universal jurisdiction by individual States, based on evidence that up to date has been denied access to and retained by the High Commissioners Office with some of it unreleased for thirty years, particularly in relation to a country like Sri Lanka which has consistently and constructively engaged with the UN and its mechanisms, points to a distinct and imminent danger which the international community as a whole need to take note of. Such unilateral actions by certain countries are unacceptable and a violation of the principles of natural justice.

In addition to the progress made since last March, Sri Lanka has provided written comments on instances of erroneous information, misconceived and arbitrary assessments in the Report. It is regrettable that the High Commissioners Office published its Report, accompanied by an unprecedented propaganda campaign on it and refused to publish our comments on the report as an addendum. This has deprived Sri Lanka and members of equal visibility of Sri Lanka’s views on the report.

Sri Lanka refutes the allegations that have been reproduced in the High Commissioner’s report, from the highly contentious Report of the Panel of Experts (PoE) on Accountability and the Report of the High Commissioner’s Office Investigation on Sri Lanka (OISL), which have been rejected by Sri Lanka for reasons explained to this Council before. The contents of the Report which have been drawn from the said disputed reports are rife with factual inaccuracies that appear to equate atrocities committed by the LTTE, a terrorist organization proscribed internationally, with legitimate action taken by the government to safeguard the territorial integrity of the country and the right to life of our people.

Insistence on ever-expanding externally driven prescriptions, notwithstanding our continuous cooperation and engagement with this Council and all UN bodies, can pose numerous challenges and such processes could set a dangerous precedent affecting all member states of the UN.

We regret the disproportionate attention drawn to Sri Lanka by this Council, driven by political motivations. Sri Lanka calls upon the members of this Council that any resolution which is based on this Report, be rejected by the Council and be brought to a closure.

In conclusion, We remain open to engaging constructively with the UN, including this Council, and the international community in mutually agreed areas, in conformity with the Constitution and in keeping with domestic priorities and policies” he concluded.