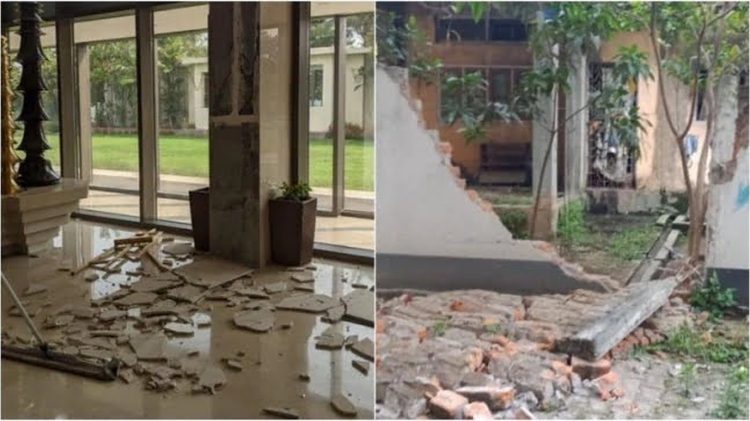 Assam experienced a major earthquake with 6.4 magnitude in Richter scale this morning (28 April 2021), which also hit neighbouring countries like Bhutan, Tibet (China), Myanmar and Bangladesh. The first tremor was felt at around 7.51 am and lasted for nearly 30 seconds, followed by a mild one (4.3 magnitude) at around 7.58 am and another (4.4 magnitude) at 8.03 am. Epicentre of the earthquake is located at Sonitpur in eastern Assam on the northern bank of mighty Brahmaputra river, adjacent to Arunachal Pradesh, which is around 180 kilometers away from Guwahati.
Official parameters from National Centre for Seismology describe its magnitude as 6.4 with location as latitude: 26.69 N, longitude: 92.36 E and depth 17 km. Reports are pouring from various parts of north-eastern region over the damages caused by three tremors. Inside Guwahati, a number of concrete buildings including government offices, market complexes, hotels, apartments, personal properties, faced cracks. Residents came out to the open space as the tremors hit in the morning hours. No casualty has been reported till now from anywhere . State chief minister Sarbananda Sonowal twitted to express his concern. ‘Big earthquake hits Assam. I pray for the wellbeing of all and urge everyone to stay alert…’, he twitted. State health Minister Himanta Biswa Sarma also twitted over the tremor and shared some photographs form the quake hit city. Prime Minister Narendra Modi spoke to Sonowal soon after the earthquake and assured all possible helps from the Centre. ‘I pray for the well-being of the people of Assam’, he twitted. Union home minister Amit Shah also talked to Sonowal and commented that the ‘central government stands firmly with our sisters and brothers of Assam’.

Half a million bribe from a underworld detainee – CID Cop remanded