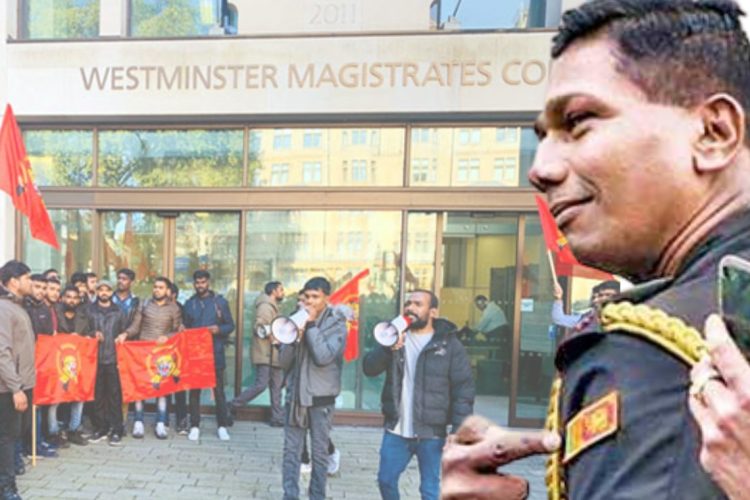 The appeal made to the UK High Court by Major Gen Priyanka Fernando, the former Minister Counsellor (Defence) of the Sri Lanka High Commission against the judgement of the Westminster Magistrates’ Court on him was allowed yesterday, 19 March 2021.

In the judgement handed down by the High Court, it decided in favour of Major Gen Fernando and quashed his conviction by the Westminster Magistrates’ Court on 6 December 2019 and acquitted him. The defendants, who are pro-LTTE demonstrators who staged protests in front of the Sri Lanka High Commission in London on Sri Lanka’s 70th Independence Day on 4 February 2018 are ordered to pay costs to Major Gen Fernando.

The High Court compellingly rejected the arguments of the defendants and accepting the arguments on behalf of Major Gen Fernando, upheld the traditional views on diplomatic immunity as contained in the Vienna Convention on Diplomatic Relations of 1961 to which both Sri Lanka and the UK are States Parties. “The interpretation of the treaty should not be an exercise in ‘pedantic literalism’. It should be read in the context of its ‘object and purpose’” said the court in its judgement. The Court said that the efficacy of the Vienna Convention depends, even more than most treaties do, on its reciprocal operation. Article 47.2 of the Vienna Convention authorises any receiving state to restrict the application of a provision to the diplomatic agents of a sending state if that state gives a restrictive application of that provision as applied to the receiving state’s own mission.

The UK High Court also draws the danger of the threat to the efficient performance of diplomatic functions which arises from the risk of trumped up or baseless allegations and unsatisfactory tribunals. It opines that from the United Kingdom’s point of view, a significant purpose of conferring diplomatic immunity of foreign diplomatic personnel in Britain is to ensure that British diplomatic personnel enjoy corresponding immunities elsewhere.

The UK High Court further says that the doctrine of diplomatic immunity affords protection to all diplomatic staff in the UK in exchange for the equivalent protection afforded to the UK’s diplomatic staff abroad. The grant of immunity does not depend on ministerial fiat, rather it exists by virtue of statute and the Vienna Convention on Diplomatic Relations.

A Stone from Sita Eliya to build Ram temple Ayodhya

A Stone from Sita Eliya to build Ram temple Ayodhya