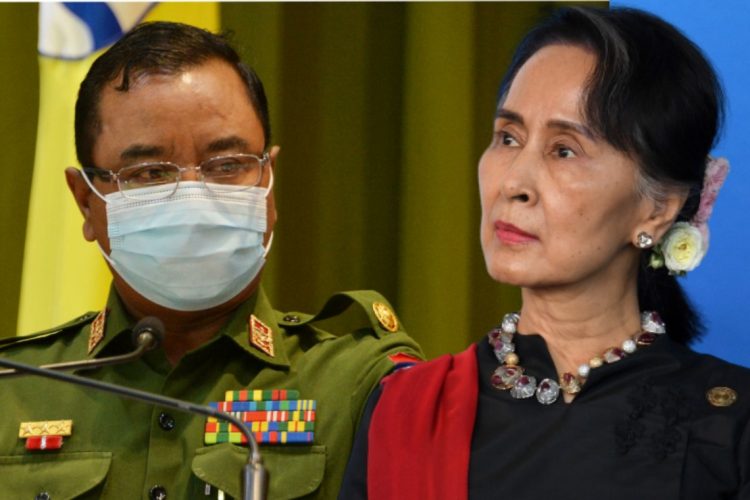 According to BBC the allegation is the strongest yet levelled by the military since it overthrew Ms Suu Kyi and the country’s democratic leadership on 1 February.

No evidence was provided. An MP from her party denied the allegation.

Meanwhile, rights group Amnesty has accused the military of going on a “killing spree”.

It said the military was using battlefield weapons on unarmed protesters and carrying out planned killings.

“These are not the actions of overwhelmed, individual officers making poor decisions,” said Amnesty’s Joanne Mariner.

“These are unrepentant commanders already implicated in crimes against humanity, deploying their troops and murderous methods in the open.”

What is the latest from the protests?

At least seven more people were killed by security forces on Thursday, taking the total death toll to more than 60. Witnesses said some protesters had been shot in the head.

Six of those deaths took place in the central town of Myaing.
“We protested peacefully,” a health worker there told Reuters news agency. “I couldn’t believe they did it.”

A further death took place in the city of Yangon’s North Dagon district, where 25-year-old Chit Min Thu died after being shot in the head.

“No-one will be in peace until this situation ends. They were so cruel with my son,” his mother Hnin Malar Aung told AFP news agency.

What are the allegations against Suu Kyi?

The accusation that she accepted $600,000 and gold was made by a former chief minister of Yangon, Phyo Mien Thein, junta spokesman Brig Gen Zaw Min Tun said. The anti-corruption committee was investigating, he added.

But it was denied by an MP from the dissolved parliament representing Ms Suu Kyi’s National League for Democracy (NLD) party.
“It is no longer uncommon to see slander against politicians and efforts to crush the party while innocent young people are killed in public,” Aye Ma Ma Myo told Reuters.

Independent international observers have disputed the military’s claim – saying no irregularities were observed.
media captionMyanmar nun: ‘Kill me instead’

Ms Suu Kyi has been held for the past five weeks at an undisclosed location and faces several charges including causing “fear and alarm”, illegally possessing radio equipment, and breaking Covid-19 restrictions.

The illegal payments charge levelled on Thursday was the most serious so far. The value of the gold the military alleges she illegally accepted is roughly £450,000.

Myanmar has been gripped by street protests since the military seized control and detained Ms Suu Kyi. Her image has been held aloft by the protesters.

The UN, US and a host of other countries have condemned the killing of civilians in the crackdown against anti-coup protesters in Myanmar, and called on the authorities to exercise restraint.

The military has dismissed criticism of its actions, instead blaming Ms Suu Kyi for the violence.