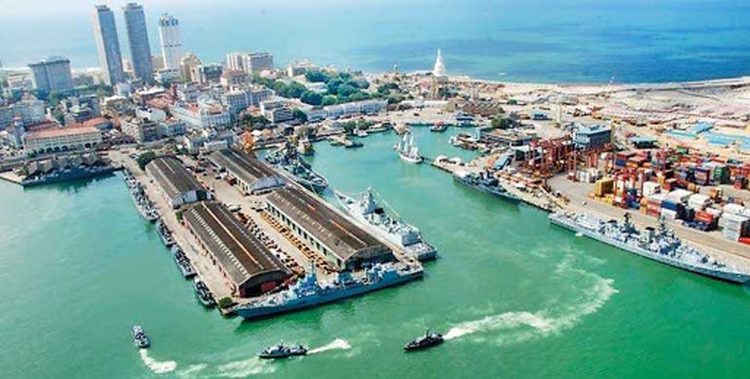 The government says that the constitution of the country will not be challenged by the Colombo Port City Commission Act presented to Parliament. Keheliya Rambukwella, Minister of Mass Media and Information stated at a media briefing today that it is a complete misconception to say that this land belongs to a Chinese or a colony of China .
Addressing a media briefing held at the Ministry of Mass Media and Information, Minister Keheliya Rambukwella stated that this land area of the Colombo Port City belongs to the Sri Lankan government and it has been handed over to the Urban Development Authority by former President Maithripala Sirisena through this gazette notification.
“The story that this belongs to China is a lie. In August 2019, the land has been amalgamated into the country in the above manner. Mr. Wijedasa Rajapaksa says that we tried to bring this as an emergency bill. 21 petitions have been filed against it in the Supreme Court. The court will also give a decision in this regard.
The other day a media channel went around the country carrying a brick. They advertised that this was the best project to take the country forward. Today this is a wrong thing to do with a hypocritical idea,”he said.
Speaking at the media briefing Minister of State Ajith Nivard Cabraal said that although there are no laws and regulations in the region today, all the laws pertaining to the Commission Act are being implemented in this regard. It covers all of these. A tax is levied in this region. But no income tax is levied. That’s why investors come. The previous government stated that this would create 83,000 jobs. When they are paid in dollars, it is bad for our country. Why three or four rules here? Investors go to Singapore because they are facilitated .If investors go astray, they will not come to this country.

But in this the common law of the country is implemented. It cannot be said that the law of the land is not enforced. The police court of our country also applies to this area. We requested that priority be given to litigation or legal issues related to this area in court proceedings. If a court decision is required and it takes a long time, it is not conducive to investors. A decision-making process should take place in a few months. But some are creating an unnecessary fear among the people that this port city will not be covered by the courts