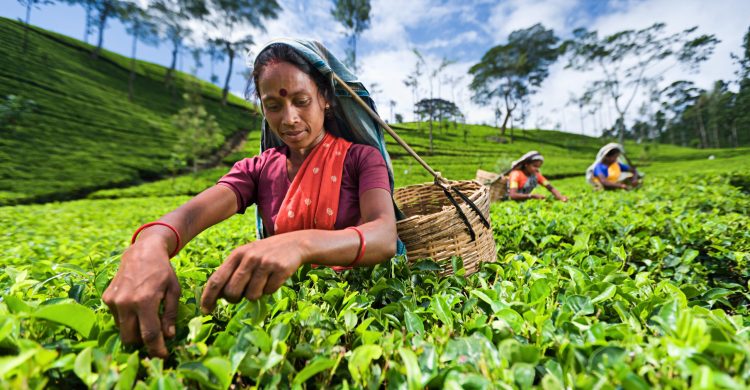 Tamil woman collecting tea leaves near Nuwara Eliya, Sri Lanka ( Ceylon ). Sri Lanka is the world's fourth largest producer of tea and the industry is one of the country's main sources of foreign exchange and a significant source of income for laborers.http://bhphoto.pl/IS/tea_plantations_380.jpg

Authorities have been directed to take a final decision on increasing the minimum daily wage of estate workers to Rs. 1,000, as per the 2021 Budget proposals by December 28.

The instructions were given by the Minister of Labour Nimal Siripala Silva.The Minister had given the instructions after considering the submissions made by both parties during the discussions with the Estate Workers’ Leaders’ and Employers’ Federation of Ceylon (EFC) representatives regarding the increase in wages.

The EFC has said plantation workers should be given an additional target of 2 kg of leaves daily, and that the employees had not carried out enough daily work that would justify paying them the gratuity at the end of their service. The employers therefore have proposed that every employee should be required to work 180 days a year.

The Minister in response has proposed to add an extra kg to the leaves plucked per day, and stated that the 180-day proposal could be accepted.

But the workers’ representatives have pointed out that it was not fair to reduce the number of leaves plucked by plantation workers that end up being assigned as crate weight and factory waste.

Taking all these factors into consideration, the Minister stated that the Government’s decision that the minimum wage for plantation workers should be Rs. 1,000, could not be changed under any circumstance.

The Minister has also instructed that if any company is unable to pay the minimum wage of Rs. 1,000, it is to hand over the estate company to the Government.